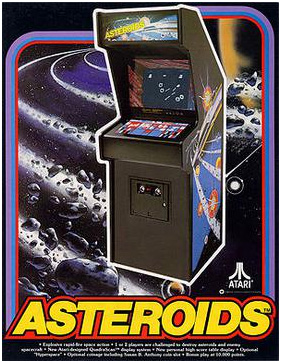 February is already here (where does the time ago?), and that means it’s time for another episode of Getting Good!

This time, we’ll be talking about another timeless classic: Asteroids. This is a game that is on par with the big ones that we’ve mentioned in the past such as Pac-Man and Donkey Kong. Developed by Atari and released in 1979, Asteroids is a product of the ‘space-age’ of video games, back when the moon landing was still somewhat fresh in the public’s collective consciousness. This achievement helped not only to further the cause of humankind and to advance our knowledge of the universe, it also single-handedly spawned an entire genre of video games based on both the marvels and horrors of outer space.

Case in point, Asteroids is a space shooter, and a very different one at that. Unlike most space shooters of the period, which consist of traversing through stages from left to right (or upwards, in vertical fashion), Asteroids pit the player in an arena of sorts, surrounded by a number of, you guessed it, asteroids. The objective of the game is to maneuver your spaceship across the field and shoot down the asteroids to get points. Upon shooting an asteroid, it will split into smaller rocks, and so on until completely destroyed. Periodically, several saucers may enter the arena from the sides, and shooting these down will grant the player additional points.

When it comes to gameplay, Asteroid’s formula is simple. Like many other games before it, its mechanics are simple to learn, yet difficult to master. Nevertheless, this didn’t stop the game from being hugely successful, selling around 60,000 arcade cabinets across the world. It’s fame was long-lived, as the game was ported to several platforms, and directly influenced the development of games such as Defender, Gravitar and, more recently, the indie arcade game, Cosmotrons.

In this article, we’ll go over the basics you’ll need to know in order to survive, and excel at this game.